DECONSTRUCTING THE cost of producing a bottle of Champagne (in the non-Derrida sense, of course) is fraught with difficulty. Firstly, it is not a subject many producers, nor their oversight bodies, jump to facilitate. Secondly, Champagne producers are diverse in the quantity and quality of the wine they produce. A producer whose motivation is to maximise his profit from the grapes he presses or the juice he buys has a different set of cost parameters from one who sets out to produce the best Champagne he can almost irrespective of cost. Indeed, one cellar master I spoke to said he had simply no idea of the costs associated with producing one of the best Champagnes in the world – the subject was never discussed. A smaller family producer said they did not consider margins either, they had in hand a programme of improvement which was only constrained by the capital available. Thirdly, it is a hugely complex business. Pricing, profit and investment decisions are made at least three years in advance (the time it takes to make a bottle of non-vintage Champagne). Fourthly, there are rules in place which govern the vineyards, harvests and production of Champagne most of which have an impact on cost. Table A is a flowchart which illustrates the connections between the various elements. The model, in mathematical form, was designed by incorporating the major structural elements of the production and winemaking structure with the appropriate time delays.

In 2009 La Revue du Vin de France (RVF) published an article in which the author compared the costs of producing different wines (Dom Pérignon, Pétrus, Musigny grand cru (G. Roumier) and Château Carpenet, a generic Bordeaux) with their ultimate selling price Note 1Le véritable prix des grandes bouteilles. La Revue du Vin de France, February 2009 pp24-29, Jerôme Baudouin. It wasn’t received with any great applause by the wine community who, according to one Champenois I spoke with, thought their winemakers might have preferred not to have had their activities analysed in this way. But according to the author, Jerôme Baudouin, the cost of producing one bottle of Dom Pérignon is between €17.28-€22.28 (compared to an ex-cellar price of €75). He estimated that Moët et Chandon makes a pre-tax profit of some €165-€190 million on each vintage released. However, Baudouin has assumed a production of five million bottles for Dom Pérignon, and although LVMH don’t release an exact figure for the prestige cuvée, Baudouin’s estimate does seem high – indeed, the drinks business fine wine power survey published in December every year suggests there is a little under four million bottles made in each vintage.

It’s also hard to see exactly how he has arrived at some of his cost conclusions, although he has included in his cost calculation (based on a production of 8,800 bottles/ha and an average yield of 65hl/ha) an imputed interest (at 5% per annum) on the capital (land) tied up during its seven years of production – an average cost of 1ha of grand cru vineyard in Champagne taken to be €1,000,000 (£839,195) (see Table C, right, for current values of land in AOC Champagne).

He also includes an estimated €5-€10 per bottle for marketing as part of the cost which would cover the expense of the Dom Pérignon ambassadors Karl Lagerfeld and Claudia Schiffer, who don’t come cheaply. But if in doubt about the large element spent on brand building, look at the ad spend in the UK for some of the big brands – see Table B. But Baudouin’s case study aside, how profitable is Champagne? 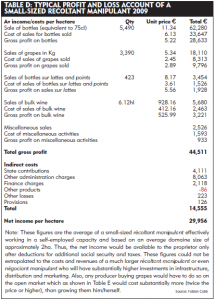 Income for most Champagne producers comes from a number of sources based on their product mix. For a typical récoltant expéditeur (a category which includes récoltant manipulant (RM) and récoltant coopérateur (RC) and accounting for 25% of volumes sold) their income will be made up of bottles sold, but also bulk wine, bottles sur lattes and points, and grapes. Average total sales per hectare are €92,050. Total direct costs are €47,542 and net income is €29,956 per hectare (see Table D, left). Vignerons have also seen the underlying values of their vineyards increase considerably in the last few years while stabilising from 2009 onwards (see Table C). The value of vineyards in AOC Champagne is also a function of its earning potential. These prices are based on AOC Champagne vineyards in good condition and are averages for the areas, in other words, actual prices might be either higher or lower depending on the specifics of the terrain. According to SAFER (Fédération Nationale des Sociétés d’Aménagement Foncier et d’Etablissement Rural), the prices for land in Champagne have more than doubled in the last 10 years. Improved viticulture (which has a significant cost input) also leads to other more manifest direct benefits. For many decades now the longevity of productive vines has increased considerably: the average age of the vines has more than quadrupled since 1980s (lower costs associated with replanting costs, vines not yet in production, better must), which is a sign of healthier vines too. Champagne producers use less fertiliser than before (lower cost), but yields have almost trebled since the mid 1950s (higher income). The weight of the grapes each plant produces has risen by more than 30% since the 1980s. Investing in the quality of Champagne and particularly in the health and quality of the grapes pays off. Compounding these benefits the prices that the Champenois can charge for their Champagne has increased such that a bottle of Champagne in 2008 sold for 36% more than it did a decade earlier, based on ex-cellar prices.

Costs of production and overheads

Costs for the Champagne producer are made up of many elements, some of which have a greater or lesser impact on the profit-and-loss account of their business depending on the individual circumstances of the firm. These might include: the cost of capital; harvested yields (differentiating between permitted and reserve stock – so-called blocage); how they use the pressings (some Champagne houses use only the cuvée – the first pressing); stock turnover that impacts cash flow: stock holding has in fact increased almost every year with levels at an all-time high in 2009, estimated by the CIVC to be around 1,344m bottles (almost five years worth of stock) and which might incur further finance charges apart from storage implications; the ageing of wines, particularly any vintage Champagne; retail prices that can be charged given prevailing economic conditions; and last but not least the price of the grapes charged by the growers – a significant cost to the large maison. Indeed, grape prices peaked in 2008 – see Table E.

If 1.2kg is required to make one 75cl bottle of Champagne then this is the factor which needs to be applied to the grapes price/kg, but these are only averages across the appellation. In some areas the prices will be considerably higher. Thus, the average cost of grapes to make one bottle of Champagne in 2008 could be estimated at €6.48 per bottle, a significant component in the cost of any bottle.

There are systems in place which make some predictions on the future demand for Champagne so that production, price and stock turnover are aligned to market conditions. These go back some three years given the length of time it takes to make the wine. The most important arrangement which underpins the Champenois’ costs is the relationship between the vine growers who produce the grapes and the winemakers who buy them. This is a highly complex system which can be significantly affected by the general economic conditions and obviously, the weather. Recent years have seen a decline in Champagne consumption worldwide. The weather in years 2007-2009 has been highly variable. Decisions taken in 2006, for example, based on Champagne sales in 2009 would have been disastrous without long-term planning and are difficult enough. Operating profit also depends on distribution networks selected, which affect retail prices.

A profitable conclusion?
The undoubted risks inherent in any winemaking enterprise are carefully managed by the Champenois through their system of designating part of the harvest as a reserve for the future. This serves two main purposes: one, to provide a product in years when the harvest is badly affected (as in 2003) and two, to reduce production where demand has decreased (as in 2009 with the world economic crisis). But the time lag involved, from planning to consumption, is such that some risk remains. The apparent profits associated with Champagne production (following a reasonable harvest) set against the risks and costs of production, should also be considered in the light of the underlying improving commercial value in the terrain. Safeguarding the rural environment and preserving the traditions and social fabric of the region while recognising its value to the patrimony of France are also of crucial importance. I would be surprised if any of the stakeholders in the larger Champagne houses, publicly listed entities on the Paris stock exchange with all the perennial commercial pressures for growth and profits, didn’t have a very strong sense of their responsibilities in this respect.

Recalling Winston Churchill’s famous remark (“Remember gentlemen, it’s not just France we are fighting for, it’s Champagne”), it is hard to conclude that a Champagne drinker’s responsibility is any less.

First published in the Drinks Business, October 2010 as Investigating the ‘pay’ in Champagne : Is the typically high cost of Champagne to the consumer justified?