Including reviews of the 2006 vintage

A cynic is a man who knows the price of everything but the value of nothing (Oscar Wilde).

Much as in Oscar Wilde's quote, understanding the economics of vineyard management, here a Premier Cru in Sauternes (Barsac), should not in itself make you appreciate this remarkable wine any more than you did before. However, understanding the care taken and investments made helps one appreciate the value of these wines. It also explains why the quality of the wines we review in this article are so high. They all compete in the same marketplace on quality and there are no shortcuts available.

Making a sweet white wine once the grapes are in the cellar is neither particularly difficult nor more costly than making other white wines, or even red. It is the work in the vineyard which is the most significant aspect of ensuring a healthy and sound crop for harvest. The other, crucial and extraordinary event in the creation of this wonderful drink, is the way the grapes are attacked by the fungus Botrytis cinerea. The spores which form on the skins of the grape suck the water from the pulp producing grapes which are higher in sugars (less diluted) and other components. In order for the infection to work the grapes must be left for as long as possible on the vine. This has the accompanying economic impact of requiring longer care, taking more risk, and because it is such a delicate balancebetween the kind of rot (grey, unwanted rot) and the so-called 'noble rot', even more care and attention at harvest time. Botrytis infections are sporadic rather than uniform, creating additional work and expense by requiring several passes through the vineyard to gather the grapes at the optimum moment. Harvesting requires properly trained people who can recognise the qualities required and make distinctions about the type of rot and the stage of its evolution. Highly trained people cost more to employ and retain. The length of the harvest adds to the wage bill significantly. Another consequence of this is the impact on yield. The vineyards in Sauternes will normally yield at best one third, or more likely a fifth of their red wine counterparts. Less wine means, perversely, more cost. 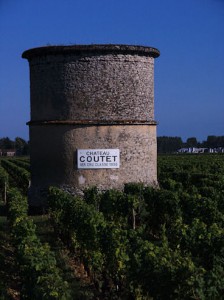 In order to explain the complexities of the financial background of an estate we have focussed on one of the top estates in Sauternes - Château Coutet, a Premier Cru Classé in 1855 from Sauternes-Barsac.

Château Coutet nestles in the hills of the valley of the Garonne, only a couple of steps from the river Ciron, benefitting from the climate and soils of a region steeped in history. The soils are of clay over a limestone subsoil. The traditional grape varietals are planted: Sémillon 75%, Sauvignon blanc 23% and Muscadelle 2%. The average age of their vines is 35 years old. The property is owned by the Baly family. Philippe Baly who manages the estate is proud of the fact that he employs more people per hectare than any other chateau. The corollary of this is that he also employs the least number of outside maintenance staff. Baly acquired the property in the 1970s seeing it as a prestigious acquisition but, being from Alsace, conscious of the old Alsatian maxim that 'one can't achieve anything in one's own back yard', hence the move to Bordeaux. Having an industrial background, Baly brought with him one fundamental piece of homespun economic philosophy: that the human resource is the most valuable in any enterprise, and he and his family have always invested in it.

Like any wine estate, the Sauternais are to a large extent at the mercy of the weather during the year and the effect this has on the vintage. For example, over a period of a decade Coutet will have three beautiful years, two good years, two rather average years, one mediocre year and one bad one. When one says 'bad', they are talking about a year such as 1991 when they managed to produce 5,000 bottles. A mediocre year may allow an estate to produce 15-16,000 bottles instead of, for example, an excellent year where they might produce 65,000 bottles. Poor weather may not necessarily mean a poor wine, but in order to maintain the quality much less will be produced. In 1993 only 5,000 bottles were produced whilst in 2000 only 12,000. Very little of this production was ever commercialised. Thus, the balance sheet of a Premier Cru of Sauternes is made every 10 years, and it's not possible to consider it otherwise. If a Château such as Coutet has not made a loss after ten years, taking into account the levels of amortisation they need on investments in the property, then they are happy.

The selling price determines the profit a vineyard can make. The costs are largely fixed, varying only according to the exigencies of the year. At Château Coutet, for example, their costs breakdown as follows: 40% salaries, 35% on management expenses, 5% on finance charges (leasing and bank charges) and 20% on depreciation (amortisation). If one doesn't allow for depreciation, one can't make investments and Baly ensures they amortise all their capital expenditure which is, on average, over 5 years (some are as long as 15 years but the average is 5 years across all their assets). If the financial costs go up, or, indeed, if one can't obtain any financing, then one would have to eat into another part of the cost pie such as salaries, which represent the greatest proportion of money invested in the business. But the salaries reflect the work done in the vineyard. Whereas a tractor can be replaced quite easily, the experience and loyalty of the staff is the most important thing at the Château, and that comes at a price. 'Savings made here would take years to recoup in terms of the quality of the wine'. Baly is clear: 'If you were my investor and you want me to make money, I would ask: what kind of wine do you want us to make? If one stops investing for even one year then the following two years one has to make it up. But if one stops investing in the vineyard then it is difficult to make up the quality ever - this is lost and one immediately sees the results in the balance sheet.' 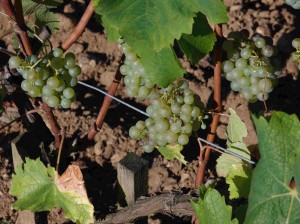 In the vineyard itself, the single most expensive part of vineyard management is the pulling up and re-planting of vines. Apart from the labour involved in all aspects of this process, the problem is that the new vines are non-productive for years and years, whilst still requiring maintenance and care, as if they were any other vine on their property, but whose grapes are not being used in the production of their top wine. The vine will take 15 years before the grape production becomes part of the Grand Cru.

Their vineyard staff are women, who have the patience and fortitude to work outside in difficult conditions. Each woman is responsible for their own parcels of vines, and specific rows of vines are checked each morning so that every vine is visited as often as possible. Otherwise, it might be 15 days, say, between visits which is too long should problems occur. The women take pride in their work, and there exists a healthy competition between them.

The cost of the wine doesn't determine the price one can sell it at. The only thing one can know when one finally sells the wine, is what it cost to produce and thus the profit or loss that was made. Clearly, going back to the idea of the ten year plan, some years one will make a loss and some years a profit and some years one will break even. Château Coutet needs to keep 2-3 years worth of stock in their cellar. The value of this stock is the cost of the wine produced during that year. The difficulty for a winemaker like Baly is that he doesn't know until at least 2 years after the wine is put into the cellar what will be the receipts in respect of the wine held. So, even if he knows the costs down to the smallest detail, he still has no idea of the sales and thus the profit he will make from a particular vintage until much later. It's hard to imagine any other industry functioning in this way.

Can one save money by investing in new techniques? Philippe Baly, is adamant. 'No. You can only improve the quality of what you produce.' Also because the competition at this level of wine-making is intense, his competitors are also searching to improve quality, not obtain economic advantages. That is the over-riding objective of wine production at this level: quality.

The crucial thing at a property like Château Coutet is that the people must be passionate about what they are doing (why else expose oneself to these kinds of risk?), be excellent managers and be in a position to reassure one's employees that all the hard work they do is both viable and appreciated. All this work at Château Coutet, is a constant struggle to produce the best possible wine requiring considerable resources and a dedication on behalf of the whole team who are working with only one goal in mind - to satisfy the end-user, the person that will drink the wine. Next time you may be about to purchase a bottle of Sauternes, stop a moment to consider the hard work, expectations, research, care and, yes, expense, that has gone into the wine and ask yourself if you wouldn't pay a bit more, not less, for such a beautiful wine. A good Sauternes will sell from £20 and upwards.

Costs and investments - How the numbers stack up

The following are costs which Château Coutet spends each year on wine production.

Make-up of the cost of a bottle:

Investments in the cellar: 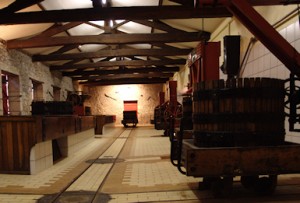 These costs would be amortised over 5 years.

Investments in the vineyard:

One could spend less by not purchasing new tractors but then you would spend more on repairs and so forth.