Part II continues the exploration of this vintage looking at the top wines, 5emes crus, supply and demand, and premiums for the appellations

About 10 years ago the New York Times columnist Frank J Prial famously declared that the vintage chart was “dead”. Today's wine makers could make good wine whatever the year's weather. At least, that was his thesis. Certainly, wine making has advanced considerably in the last 30 years, the upward path being rooted as much in more attentive viticulture as employment of revolutionary techniques and technologies. Whilst this focus on the health and maturity of the fruit doubtless plays a large part, this would tend to confirm a link with weather, rather than denying it. Roman L Weil, co-Chairman of the Oenonomy Society of the US, investigated Prial's idea and asked a sample to rate their preferences of two different vintages (one rated as “Average to Appalling” the other “Excellent to The Finest”) Note 1 Parker v. Prial: The Death of the Vintage Chart [Lighten Your Wallet]. Roman L. Weil, Co-Chairman, Oenonomy Society of the US. RLW VDQS, 2001 . Weil's conclusion was as follows: “the wine drinkers on whom I’ve systematically tested Prial’s hypothesis cannot distinguish between wines of good and bad vintages, except for Bordeaux, and even when they can distinguish, their preferences and the chart’s do not match better than a random process would imply.” It seems therefore that Prial is right insofar as a drinker might not be able to tell the difference between good and bad vintages. On the other hand, collectors and investors who make their money from speculating on Bordeaux wines do makes distinctions between vintages. Release prices, however, don't always reflect either the immediate market conditions nor the long term prospects for the wine, viz the 2007 vintage and despite Prial's emphatic statement, prices of Bordeaux wines in the secondary market fluctuate considerably depending on the perception of the vintage. 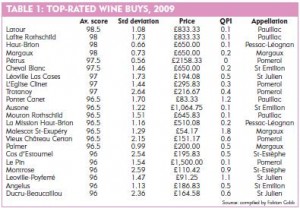 There is no doubt that 2009 is one of the most highly sought-after Bordeaux vintages ever and the conduct of the en primeur campaign suggests that the world's economic woes are behind us. The demand for these wines will likely continue to be strong throughout their long life. During every Bordeaux en primeur campaign the media often focus on the most expensive wines, as headline grabbers, even though these are unlikely to be of much interest to wine enthusiasts at the prices at which they are offered. The relatively low values of their Quality Price Index Note 2All release prices based on Bibendum offers during April - June 2010, wine-searcher.com, Corney & Barrow and Berry Bros & Rudd. Critics' scores used include: Jancis Robinson, La Revue du Vin de France, Tim Atkin, Wine Spectator - James Sucklings' barrel samplings, Jean-Marc Quarin, Robert Parker. Where two scores are offered e.g. 92-94, we have used the mid-score point. Scores out of 20 are translated into 100 point scores according to our own conversion table. All prices quoted in bond. Tables are built around red wines only. - QPI Note 3see Part I for an explanation of QPI and its use - confirm this, whilst the absolute cost is a sufficient deterrent. However, these asset class wines are, generally, the mostly highly rated –see Table 1 - Chart of the Top Scoring wines 2009 – much further down the list only Carruades de Lafite stands out as an example of a wine severely over-priced in its category. These are wines most desired for speculative purposes, but what of the more reasonably priced wines, say the cinquièmes crus? Chart B - 5eme Crus release price 2000-2009 illustrates how a couple of these wines have performed over the last decade (a shortage of space forbids showing more wines). 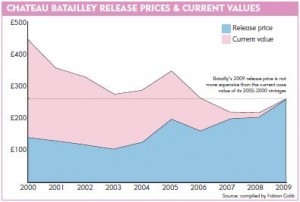 Firstly, it is worth pointing out that both these wines have done better than if you had invested your money which returned 10% compound interest over the years – that is extraordinary in itself. Turning it around the other way, you would have lost to the market if you had not bought the wines in the hope that you could buy them relatively cheaper later on. For example, you might have decided not to buy Lynch-Bages 2000, and assumed it would do no better than to reach a value of around £650 in 2010 (10% compound increase per annum). You would then have been disappointed when you found it hard to buy it for less than £1,400 per case today. Both Batailley and Lynch-Bages show very positive growth for their 2003 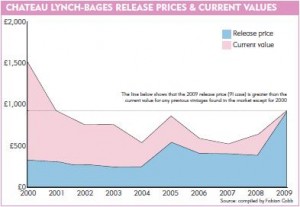 vintages which is what you might expect for a precocious year. The current release price for either wine is, in the case of Batailley, less than the current value for almost every vintage except for 2007 and 2008. For Lynch-Bages, however, it is largely equivalent or mostly exceeds current value by a substantial margin with the sole exception of the 2000 vintage - in itself something to ponder.

Supply and demand
How does the demand for Bordeaux wines relate to supply? Clearly yield is one factor, but not a determining one. Good years may produce high yields and lower yields (often associated with good viticulture through, for example, green harvesting) can also mean that frost and hail have decimated crops which don't always then go on to make the best wine even in an otherwise warm and sunny year. However, the size of the terrain will undoubtedly impact on the quantities produced. I have made a list of some châteaux, their vineyard sizes, release prices and their QPI – see Table 2 - Wines, release prices and hectares - Bordeaux 2009. As one might expect the smaller properties are in Pomerol and Saint Emilion, the larger ones in the Médoc. On the face of it, it doesn't appear to make much difference to the prices châteaux charge. Clearly there is a connection with some wines and their scarcity but it still makes Le Pin and Ausone look better value. Some châteaux are more in demand than others, but a domain which produces more wine at a higher price is going to have to work harder to sell their wines and vice versa although the market can be controlled to some extent by releasing the wine in tranches. The table 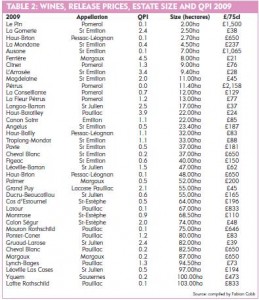 doesn't, of course, take into account the acreage used to make the Grand Vin or the yield. Note 4For example, some châteaux acreage may include white varieties although, for example, I have excluded this for Haut Brion. Table C highlights Ferrière, La Gomerie and Haut Batailley as some of the best value wines based on both their production and QPI.

Appellations
Some appellations achieve much higher prices for their wines than others all other parameters remaining the same (given the small sample size I've used the premiums are skewed quite significantly), for example, Pomerol. I've created a table which summarises this data for certain châteaux – Table 3 - Average release prices based on the top 10 most expensive wines from the Appellation – Bordeaux 2009. The concentration of asset class wines in specific appellations can be seen quite clearly. Generally, as one moves north through the Médoc the wines become cheaper (with the exception of Pauillac) but it also shows the value to be found in a year like 2009. The average QPI demonstrates where the value is to be found but as importantly makes one consider the wines from the standpoint of style rather than score.

Conclusion
A QPI in the context of a particular vintage illustrates value, not investment returns. For some wines, a low QPI correlates to a high return later in life. We have seen with a couple of wines from the cinquième cru that their values have generally performed better in any vintage (2000 onwards) than one might have reasonably expected. For other wines a QPI simply expresses what it attempts to represent. Going in to the detail: Carruades de Lafite (the second wine from Château Lafite) is now more expensive than Ducru Beaucaillou, Montrose, Vieux Château Certan, Haut Bailly and the Pichons Longuevilles. Whilst many reasons have been put forward for the high prices in 2009 there is no doubt that it is the Far East which is driving this particular wine's success. It has been suggested that 'respectable' wine merchants should cease to sell this wine at the price levels the Far East will pay (this applies not just for the 2009 but particularly earlier vintages which are very poor value even if much cheaper). There is an irony between the import of cheap Chinese products into the West bought purposefully because they are 'cheap' and the export of a wine to the East bought expressly because it is 'overpriced'. Is it a moral quandary worth considering?

If the vintage of 2008 was the Year of the Price, then 2009 is the Year of the Weather. The economist Orley Ashenfelter has written a number of research papers on wine pricing and its relationship to climate. His work on the impact of weather during the growing season on those of primeurs and wines available in the secondary market persuaded him to conclude that “ 'bad' vintages are over-priced when they are young, and that 'good' vintages may sometimes be under-priced when they are young. Rational buyers should avoid bad vintages when they are young, but they may sometimes wish to purchase good vintages.” What Ashenfelter feels unable to explain are the motives behind the purchase decisions: “Why have buyers ignored the evidence that the weather during a grape growing season is a fundamental and easily measured determinant of the quality of the mature wines? And will they continue to do so as the evidence for the predictability of the quality of new vintages accumulates?” Note 5Bordeaux wine vintage quality and the weather. Orley Ashenfelter, and David Ashmore and Robert LaLonde. Chance, Vol. 8 No. 4, 1995. The ramifications of this simple statement are considerable and something we all need time to consider even if the market has moved on since he first considered the proposition. It is perhaps not as obvious as it seems particularly since many buyers appear to eschew completely any notion of a quality price correlation.

This article was first published in the Drinks Business in July 2009.